Here is some interesting news related to the Bollywood Actor Sonu Sood. Well, do you follow Sonu Sood on Twitter? Because those who are fans of Sonu and frequently follow him on Twitter might be knowing his contribution to the people affected by Covid.

Yes, he has been helpful to them for a long time. If anyone required plasma donors or oxygen cylinders, he was always there with those covid patients. He has always been working hard to help these covid affected patients. Even he tried his best to search hospital beds and provide necessary resources. So we all are very grateful to this kind-hearted person. So it is very clear that he will not allow anyone to ruin his efforts.

Yes, you guessed it right that Sonu has made efforts to let people know about the activities of China that may cause harm to many Covid patients. You may have heard that many oxygen concentrators are coming from none other than China. But you might not know that China is making efforts to constantly block the consignments of oxygen concentrators. This is exactly what Sonu Sood tried to convey about China to the common people out there. He found Twitter suitable for spreading the awareness of this message.

Yes, Sonu was depressed and expressed his views on Twitter. His words tried to express the following: 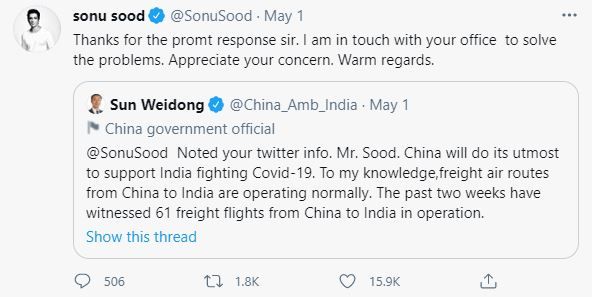 Today every corona patient is dying now and then where oxygen cylinders are like a blessing to them. And, sadly, the Chinese ambassador has blocked the export projects of Oxygen concentrators in this critical situation.

In short, he wanted to express the situation of Covid patients to the Chinese ambassador. This shows he is very concerned with the pain of corona patients. He has not even hesitated to make such a big comment on social media as well.

Before moving forward, you must know that a large number of people have shown support to the tweet of this actor. Undoubtedly, he has received several reactions from them. Not only comments, but people have also requested China for further proceedings of oxygen consignment to India. Yes, you have guessed it right. Sonu Sood has also sent a request message to the China ambassador to help them with oxygen concentrators.

So friends, now you must be curious to know about the response given by China. Right!

Well, the Chinese government moved very fast after such a post on Twitter. Sonu was overwhelmed by such a quick response from China.

Chinese ambassador Sun Weidong has assured that India will always get every possible help from China. He also informed that 61 freight flights are on their way to reach India. Everything is under control. There are no abnormalities in the working of freight air routes.

Such a message has also provided a sense of relief to the nation.

Actor Sonu Sood expressed his gratitude for the prompt response of the Chinese ambassador to India. He was very touched by the helpful attitude of Sun Weidong towards India.

A List Of Countries Helping India Through Its Covid-19 Crisis

Common Mistakes That We Do While Communicating In Organization